HSF #6: Fairy Tales (or Put on Your Dancing Shoes)

After much wracking of my brain (it's a good thing I started planning the whole year's worth of challenges in January, because I was stumped for over a month), I had no ideas.  This frustrated me to no end.  I loved retellings of fairy tales and Terri Windling and Ellen Datlow have been two of my favorite authors/editors for years!

Then I was reading Genevieve Valentine's blog and she featured an excerpt of her upcoming new book: The Girls of the Kingfisher Club.  It was a retelling of The Twelve Dancing Princesses set in the 1920s.  And inspiration suddenly sizzled. I would make a pair of 1920s dancing shoes!

One of my recent obsessions has been the glorious rhinestone encrusted heels of 1920s shoes. So gorgeous, so glittery, so completely not anything I had the slightest use for. 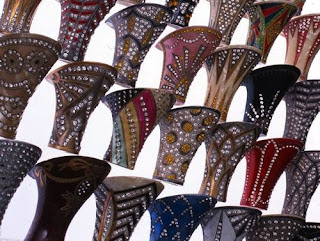 Possibly from the Bata Shoe Museum collection or Museum of Modern Art Tokyo..  I've seen this picture several places on the internet with conflicting sources

But boy, they would make a fun entry for the Fairy Tale Challenge!

Step One was to stop by Vintage Dancer to see if I could find a pair of shoes to bling up. I have wide feet and a high arch, so shoes are always a bit of a challenge.  Serendpitiously, I found a pair that not only had a nice 1920's vibe, didn't have too high a heel and came in a extra wide but were also only $24.99.  What color?  Hello, this is me we're talking about...  Black velvet...  of course!

While most of the examples of heels with rhinestones were celluloid, there was an example or two of self fabric heels that I found  so I didn't feel too bad.  (And pragmatically, I was lucky to find a pair of suitable shoes in the first place.. asking for celluoid heels too was pushing it.) That looks like a fabric heel to me!  (from Shoe Icons)

The only experience I've ever had with adhering rhinestones to anything was using a pressing machine to heat transfer appliques and that was clearly not going to be feasible on shoe heels.  So I ordered a variety of glues and other supplies from the web and hoped one would work. 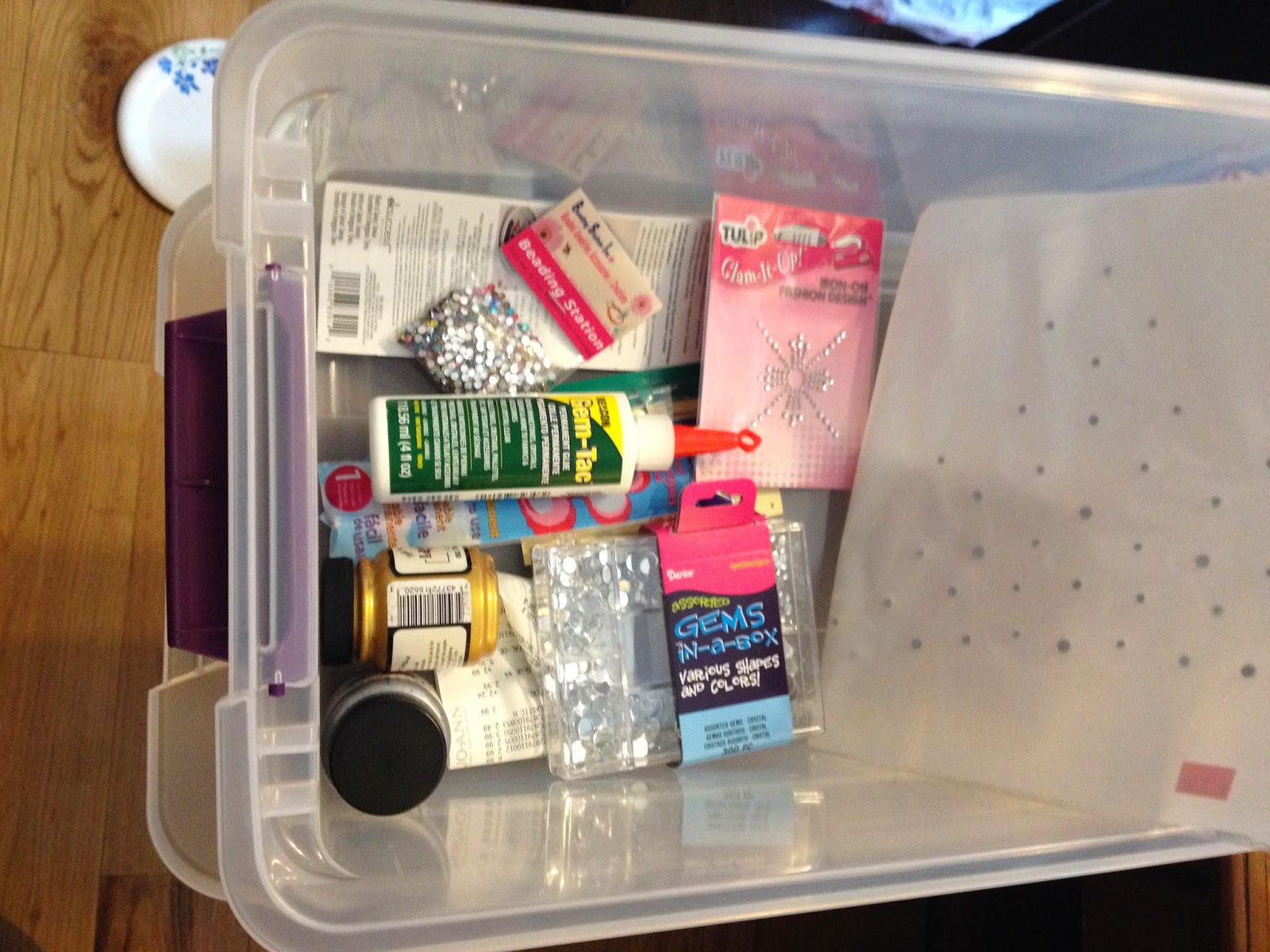 While I was in my favorite local fabric store buying buttons for Jay's vest, I struck up a conversation with one of the women in line for the cashier and she suggested hot fix crystals.  It sounded like a tidier method than glue, so I braved Joann's and got a hotfix setter and some hotfix stones. 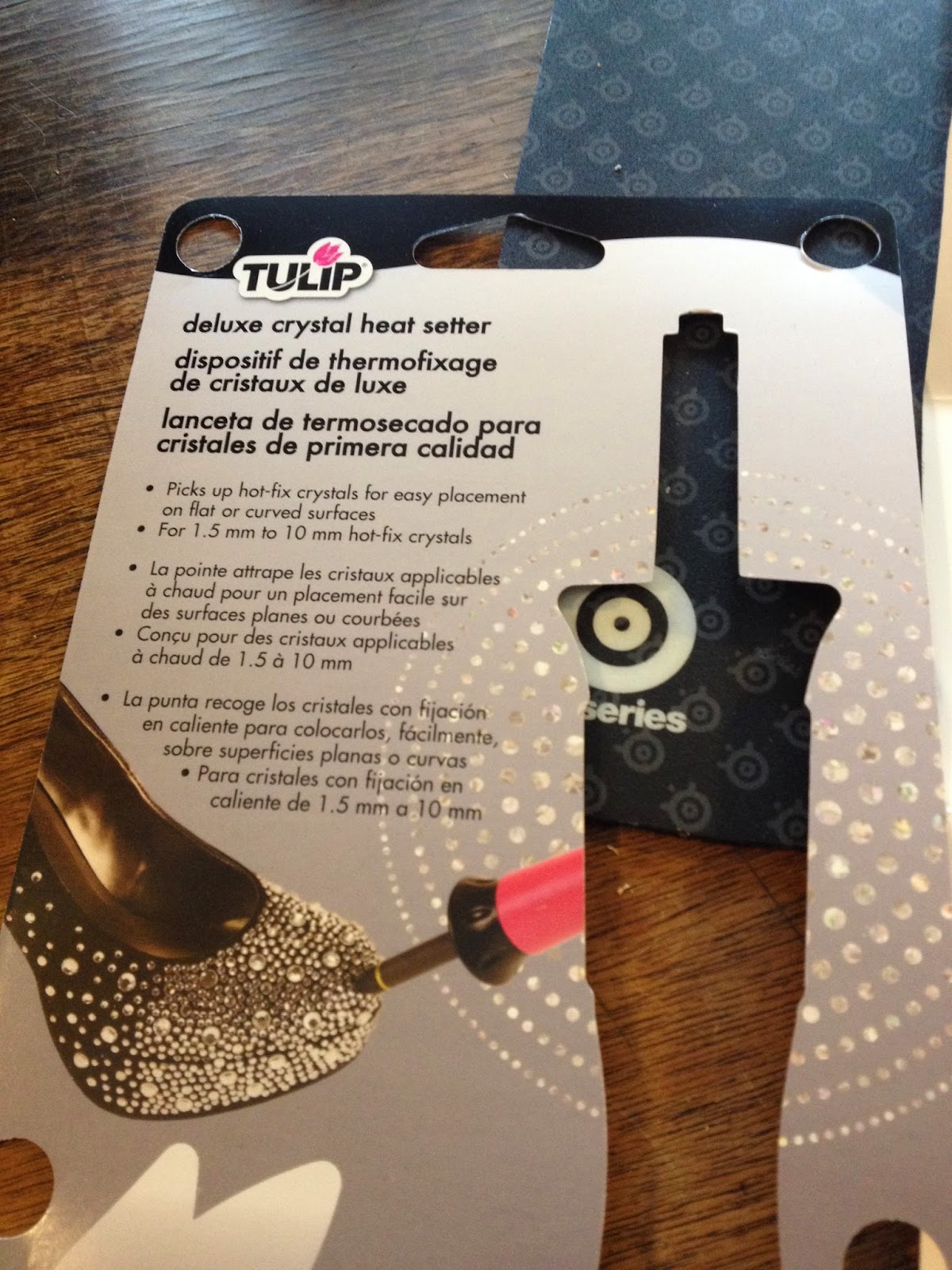 I did a test on a cast off pair of ballroom shoes I had in the garage and I was pleased at finding this was a low learning curve sort of skill. 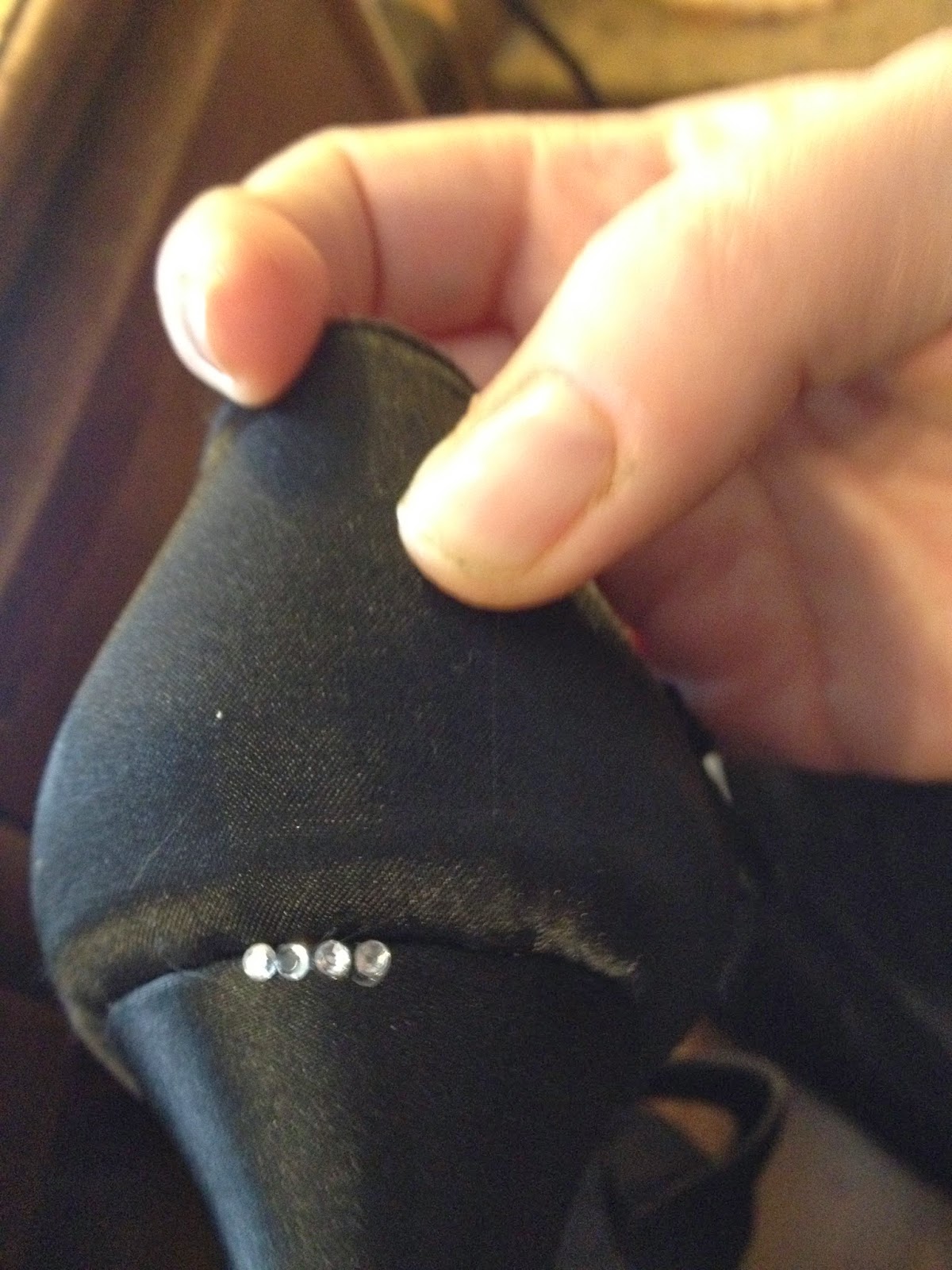 So far so good!

I did however, realize from the test that I was definitely going to need more stones for any sort of respectable level of bling.  So it was back to Joann's (ugh) for more stones.  I still would have been fine if there hadn't been a woman with a baby carriage blocking the aisle and forcing me to the other end of the aisle to get to the cash register.  Because on that end were the swarovski crystals that I'd missed the previous visit.

When I was shopping for my ballroom dress for comp, my teacher was very, very specific.  Do NOT buy a dress with Korean stones.  If it doesn't specify swarovski crystals on it, it is not an option.  While I heeded his requirements,  he is in general, a very exacting sort of person. At the time,  I had just put it down to his personality.  It wasn't until I put the package of Korean stones next to the swarovski crystals that I fully understood the difference between the two.  I was hooked and thankfully, they were 30% off because cheap swarovski crystals are not!  *sigh* 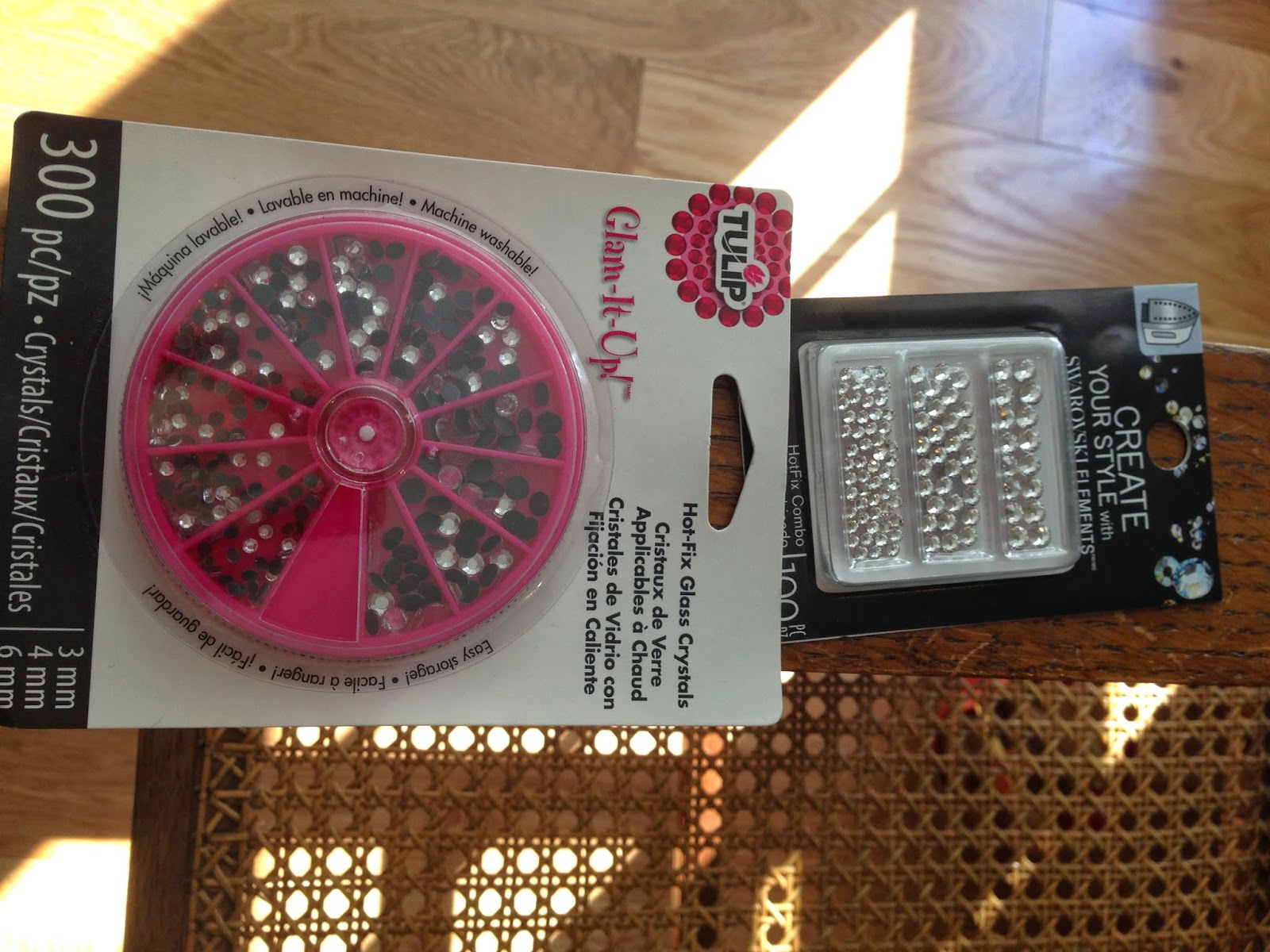 The swarovski crystals (of course) needed a different hot fix setter but I was finally settled in with some CSI:NY reruns on Netflix and set to affixing stones.  I don't have a lot of flat workspace in my sewing room, so I spread things out on my desk in my office so I could stream netflix on my monitor.  What I didn't account for was a pretty much non-stop stream of kitty traffic across the desk. "Whatcha doin', Mom?   Hmmm..  this is new.  And it smells funny.  Ooooh  and it sounds like a cat toy!"  The different sizes of stones got jumbled quickly by kitty paws but no serious damage was done. (Although the black velvet was a magnet for cat hair)

Per the directions, each stone took 15-30 seconds to affix and had to be placed manually.  It's not difficult but it is a bit tedious and unforgiving work.  Once that stone is in place,  it's there for good. There is no brief grace period to woodge it a millimeter or two in one direction or another.  After two and a half hours, I realized that I was going to need more of the Silver Night colored stones and that I desperately needed a break before my eyes started crossing. 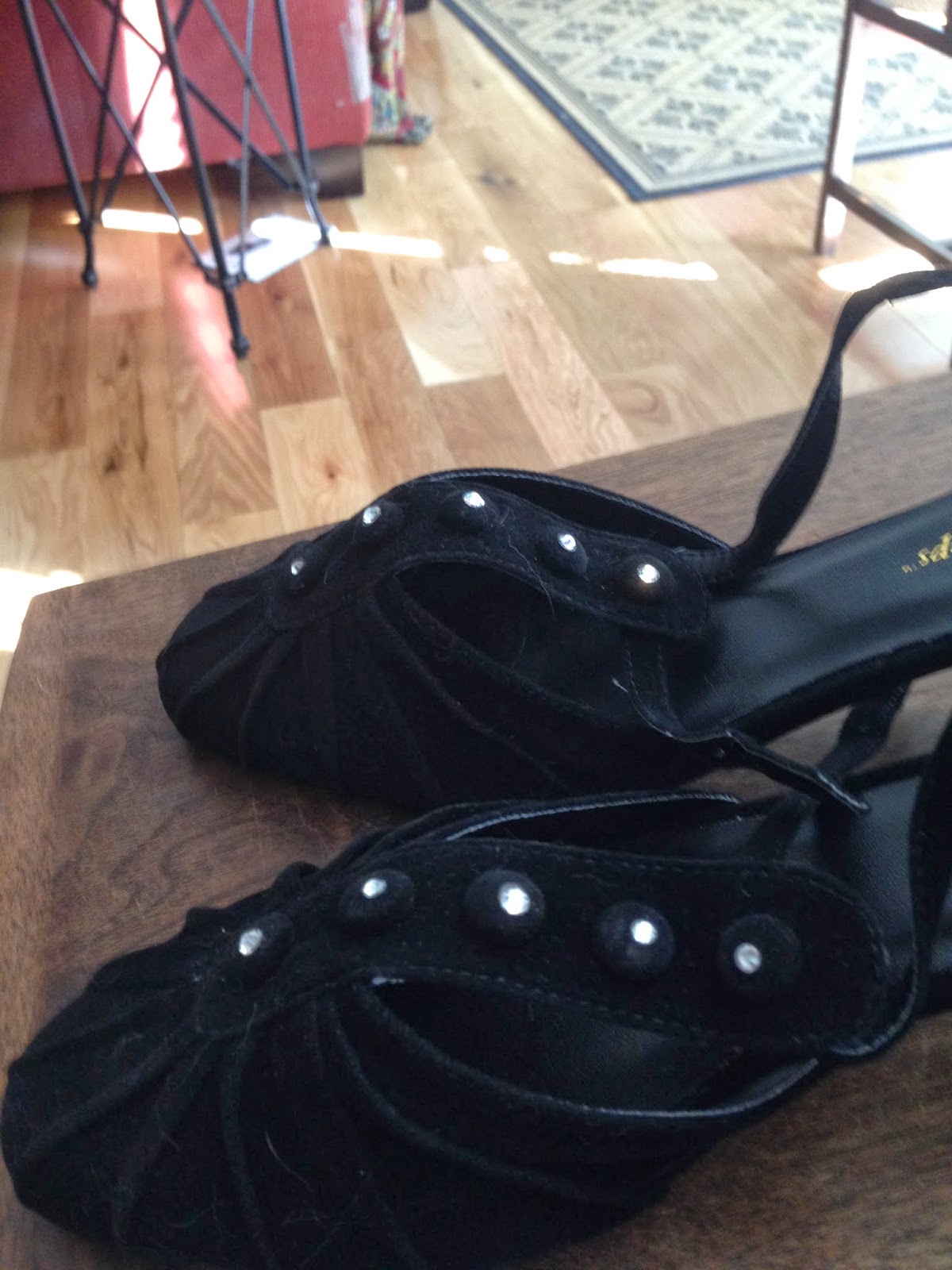 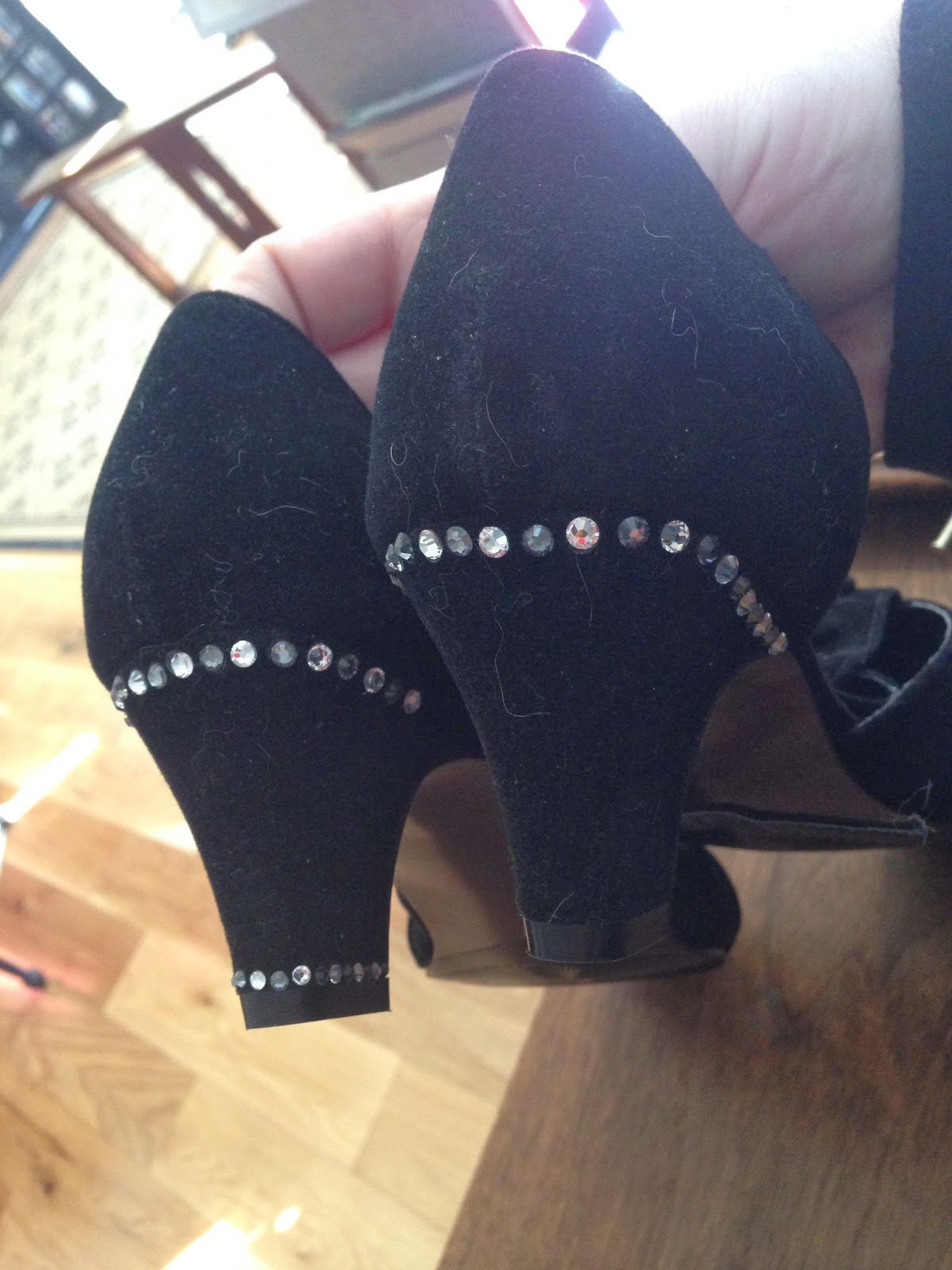 2 and a half hours worth of work


As I worked on the shoes over the next week, my technique improved and I realized that there is a little woodge room to move a stone, if I'm careful.  If I applied the hot fix setter for 5 or so seconds and then pulled it off, I could nudge the hot stone a little with my fingernail if it wasn't exactly where I wanted it and then apply the setter again to lock it into place.

My original plan had been to highlight the sunburst folds on the toes once I got the heels done, but when I looked at how many packages of crystals I'd used on the heels (and how many I was going to need for the toes) I decided to forgo the toes other than the large stones on each button. Especially since the packages had 3 sizes of stones in them but I was only running out of one size.  If I ever have an occasion to wear these shoes (and a dress to go with them) I might rethink this, but for now, the extra expense just didn't seem justified.

All in all I am pretty pleased with how they came out.  And I have the added bonus of knowing how to use the hotfix setter if I ever need to replace stones on my ballroom dress. 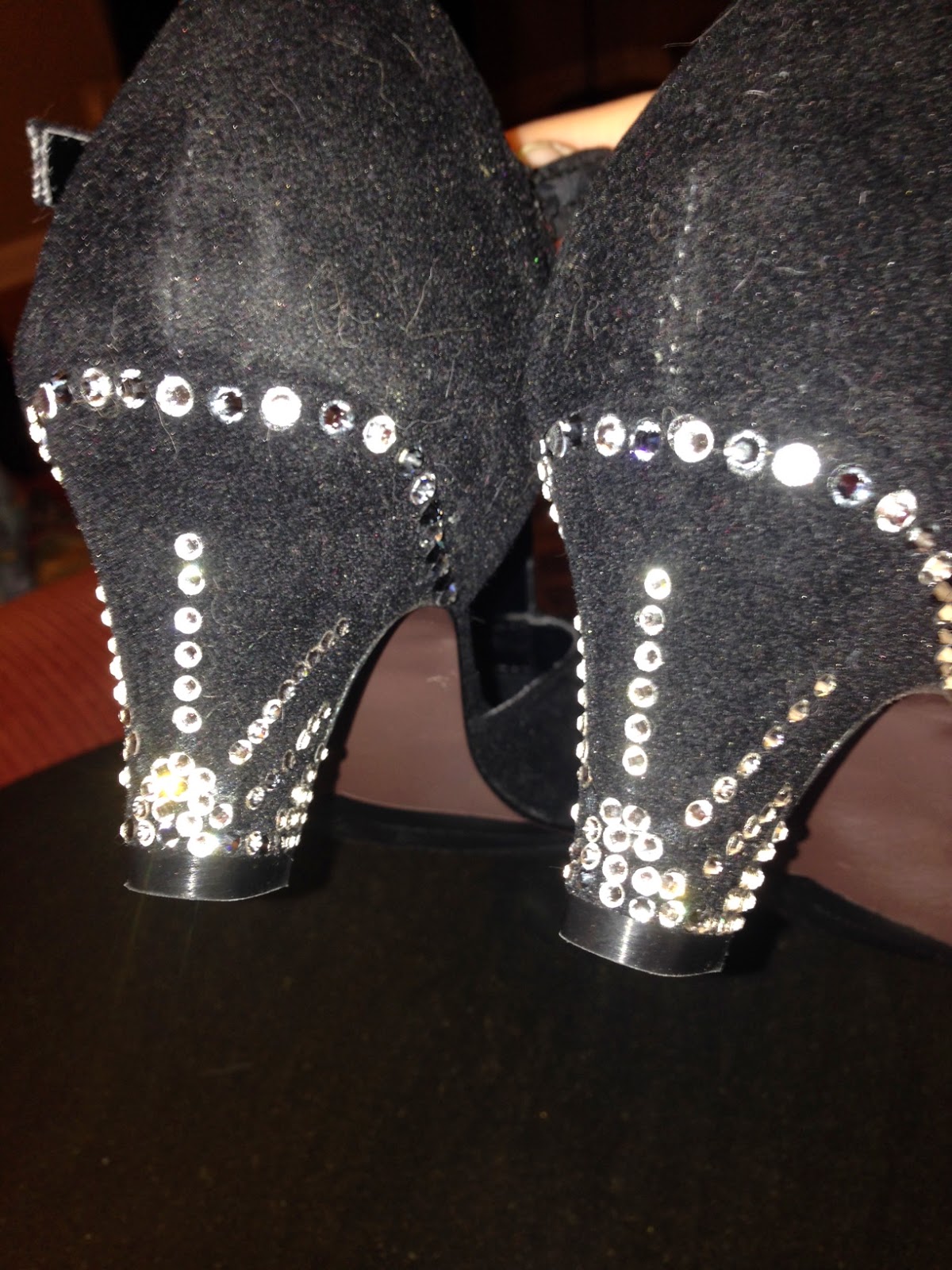 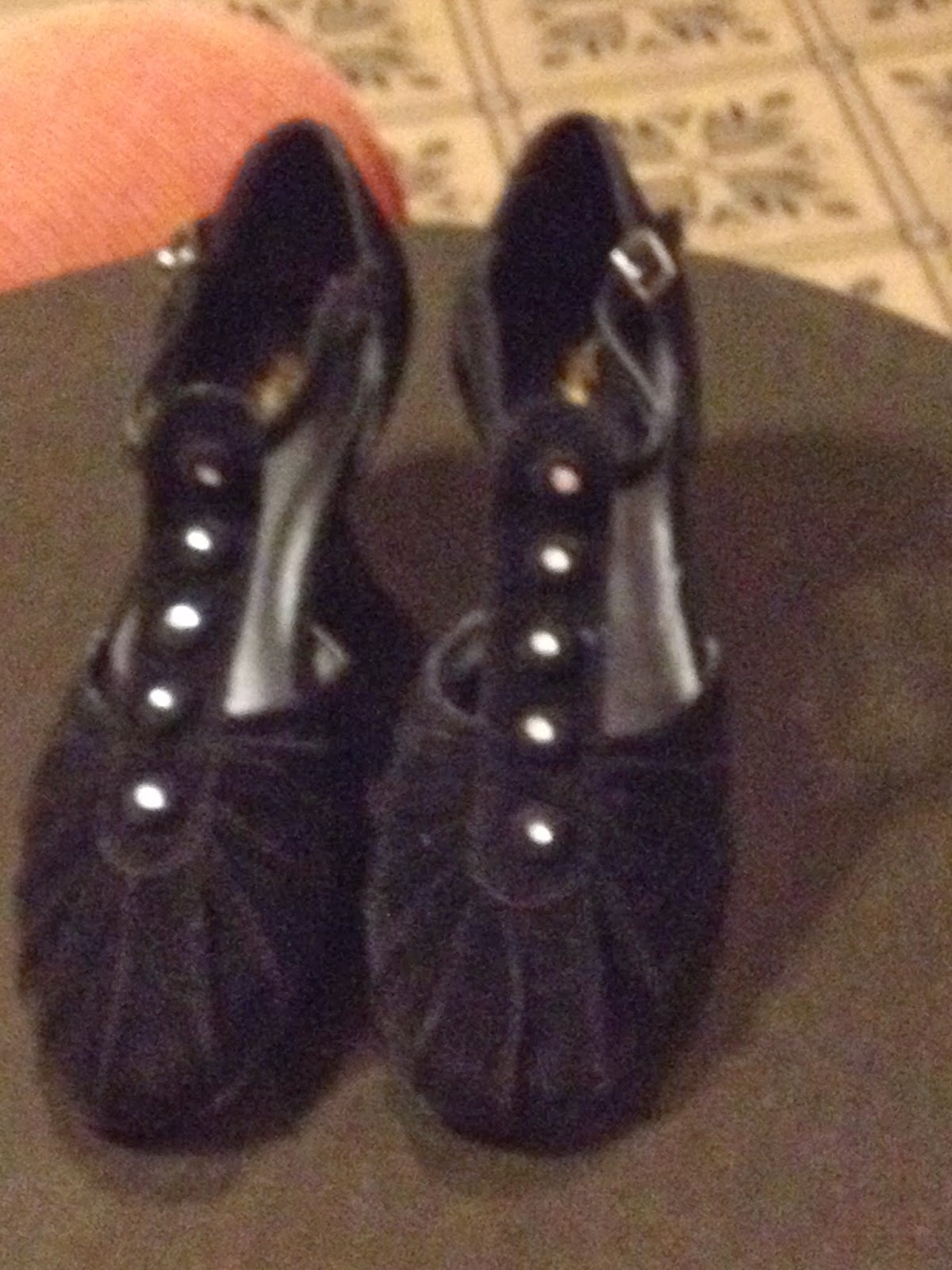 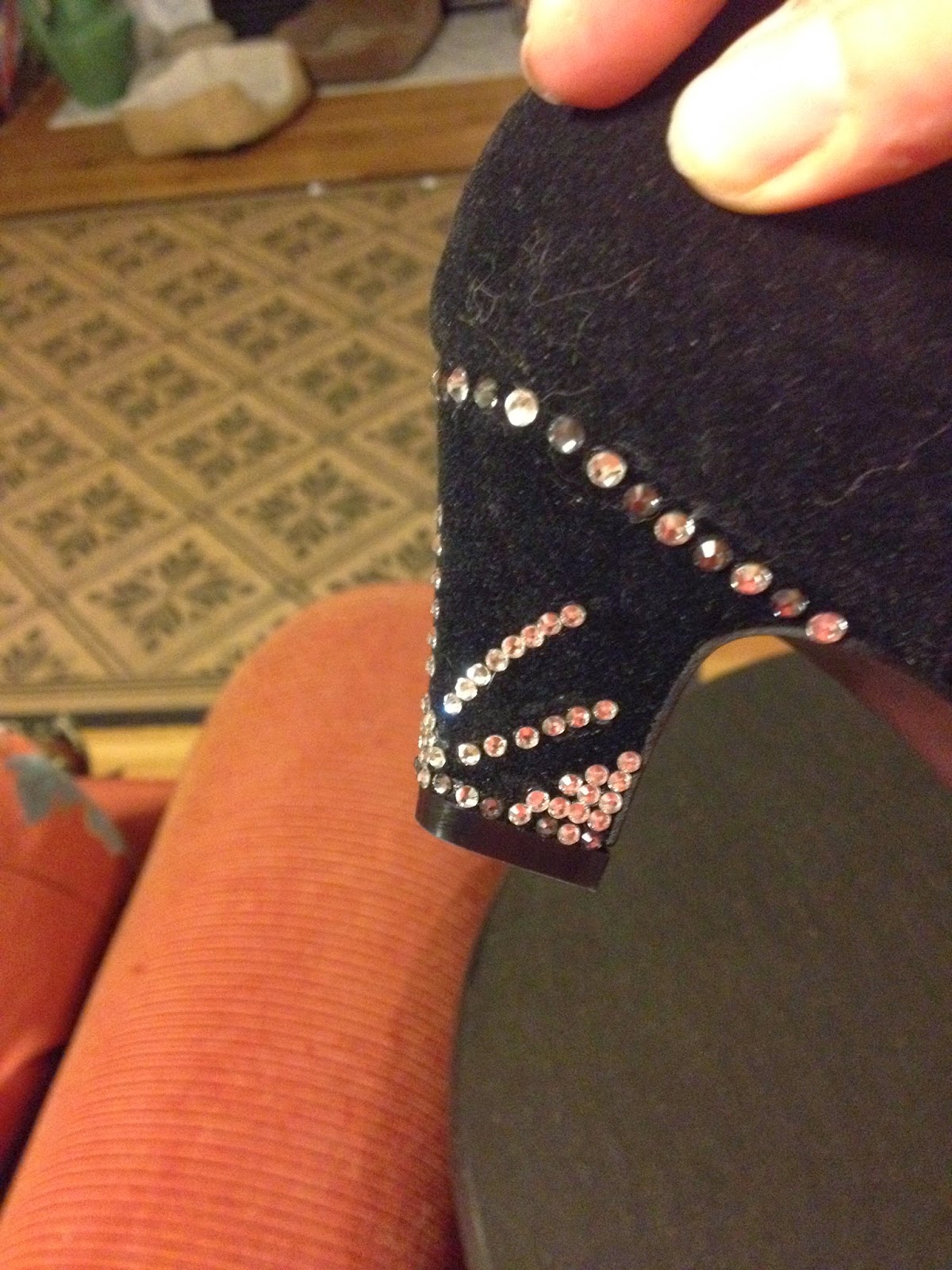 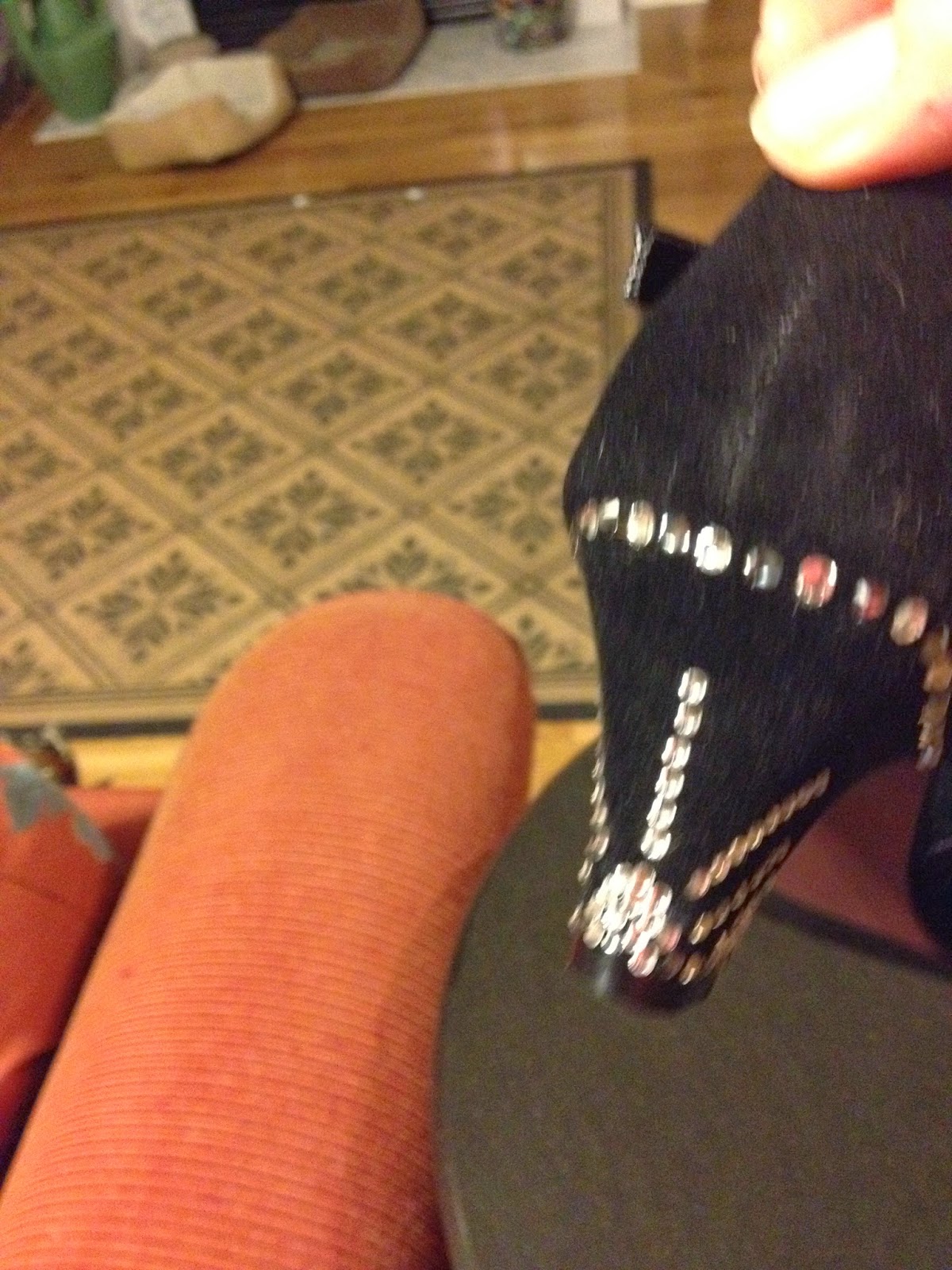 Challenge:  #6 Fairy Tales
Fairy Tale: 1920s dancing shoes for one of the Twelve Dancing Princesses to Charleston the night away in
Fabric:  Black Velvet shoes
Pattern: I based the pattern for the stones off of a pair of extant heels I saw on Augusta Auctions
Year:  Later 1927-1928
Notions: Swarovski crystals and lots of them
How historically accurate is it? 60%?   The look is right, but there was no realistic way to do this and be purely historically accurate. They are modern shoes, but in a 1920s style and while the hot fix method is certainly modern, Swarovski patented his electric crystal cutting machine in 1892 and the Swarovski company itself has been around since 1895.
Hours to complete  10ish
First Worn:  Not yet
Total Cost: $24.99 for the shoes themselves, $15 for the hot fix setter and then $30 or so in stones (not counting the leftovers of some sizes & colours that will be going in the stash or the materials I got but didn't end up using)
Posted by Alisandre de la Chapelle at 8:23 PM

Independent researcher of a variety of obscure topics. Mid-level sarariwoman by day. In the SCA I am known as The Honorable Lady Alisandre de la Chapelle. Follow me on Facebook at @AlisandreDLC